One of the most incredible sand islands in the world, Fraser Island, is not found in the exotic tropics - but right here in southeast Queensland, just north of Brisbane!

Fraser Island is the world's largest sand island - measuring an incredible 184,000 hectares and stretching over 120km north to south. 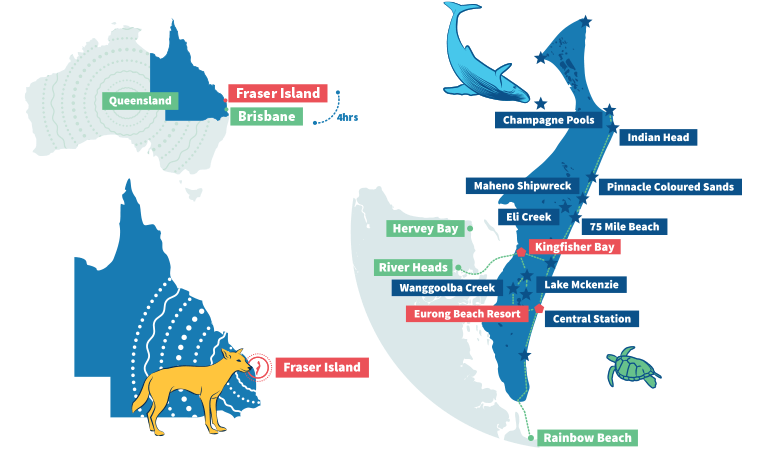 Some of the most spectacular beaches, headlands, lakes, creeks and rainforests found in Queensland are to be seen on Fraser.

In fact, Fraser is the only place in the world where tall rainforests grow on sand dunes, at elevations of over 200m. Here, and on the adjacent mainland - but nowhere else - has soil developed to a depth and richness capable of supporting tall rainforest.

Little wonder then, that in 1992, the Island joined nine other special sites in Australia and was World Heritage listed for present and future generations to enjoy.

Fraser Island has plenty of superb coastline, stretching for miles on end. The main stretch of sand lies on the eastern side of the Island, and is known as 75 mile beach - for good reason!

In the same way as other southern Queensland sand islands, Fraser's sands originate from materials weathered from the mountain ranges of Northern New South Wales.

Over the centuries, eastward-flowing rivers, ocean currents, and consistent winds have driven large amounts of sand northwards, depositing them at rocky outcrops such as those found two-thirds of the way up the east coast of Fraser Island.

These outcrops - of volcanic origin - make up the landmarks now referred to as Indian Head, Waddy Point and Middle Rocks, each worth visiting themselves.

The Island's sand provides a stable base for a high water table, and Fraser has the second largest concentration of lakes in Australia (after Tasmania). There are more than 100 freshwater lakes and more than 40 perched lakes.

Visitors to Fraser can enjoy day cruises, camping safaris, or stay on the island overnight. There are three resorts - Kingfisher Bay, Fraser Island Retreat and Eurong. In addition, houses can be rented on the island.

Self-drive tours in hired four-wheel drives are an option, or for those who want to sit back and have it all done for them, there are several excellent tours.